In April I entered a sketching competition about drawing people at work. For my first entry, I decided to make a reportage illustration of ‘A Day in The Life of a Hairdresser’… I’d like you to meet Tracey.

When I read about a ‘sketching people at work competition’, I almost squealed with excitement. I love reportage illustration so it was a perfect assignment for me.

The Center for Transformative Work Design in Australia and their artist in residence Lynne Chapman organised the competition. Entries had to be submitted in long concertina sketchbooks. They needed to include a series of sketches and a short written interview. Each artist was allowed three entries. I wanted to illustrate jobs that would allow me to draw a strong visual narrative.

I toyed with a few ideas but most of them were either too hard to implement or didn’t have enough visual interest.

It’s a few days later when Tracey was cutting my hair that I found my first sketching people at work entry! Hairdressers’ shops are busy with lots of people and interesting things to draw:   ideal to try your hand at reportage illustration.

I called again at Tracey’s salon a few days later with my sketchbook. While customers were quite still, Tracey herself was moving all the time. I couldn’t ask her to stand still, so had to look for patterns in her actions and come back and forth between sketches, hoping she would assume a similar pose later on.

The salon was busy and customers were coming in one after the other so I left some of my interview questions with Tracey for her to answer later (see my interview write up below).

It was an exciting and productive morning. I am getting a taste for reportage illustration. I love to draw fast: there is no time to think. After a while, you get in the groove and everything flows… Magic!

View A Day at The Garage my second entry for the competition.

A day in the life…

Tracey is a hairdresser. She works with a couple of assistants in the tiny salon her mum opened over 50 years ago. She still cuts the hair of some of her Mum’s very first customers, and that of their children and grandchildren.

Has the job changed over time? Well, the shop has been decorated many times and hair colours are now made with gentler chemicals, but the business operates in much the same way as it did years ago.

Technology hasn’t changed the job either. While some hairdressers use social media and the internet to grow their customer base, Tracey hasn’t had the need to do so. She has known most customers for years and many have become friends. With a solid customer base, she is able to organise her working week how she likes.

Hairdressing is a busy and demanding job: you are on your feet all day and need to be a good timekeeper as you work to appointments. You also need to be a good listener and communicator to give customers hairstyles they like.

Tracey loves her job and rates it 10 out of 10. She says ‘ I enjoy being creative and making people look and feel good about themselves’. 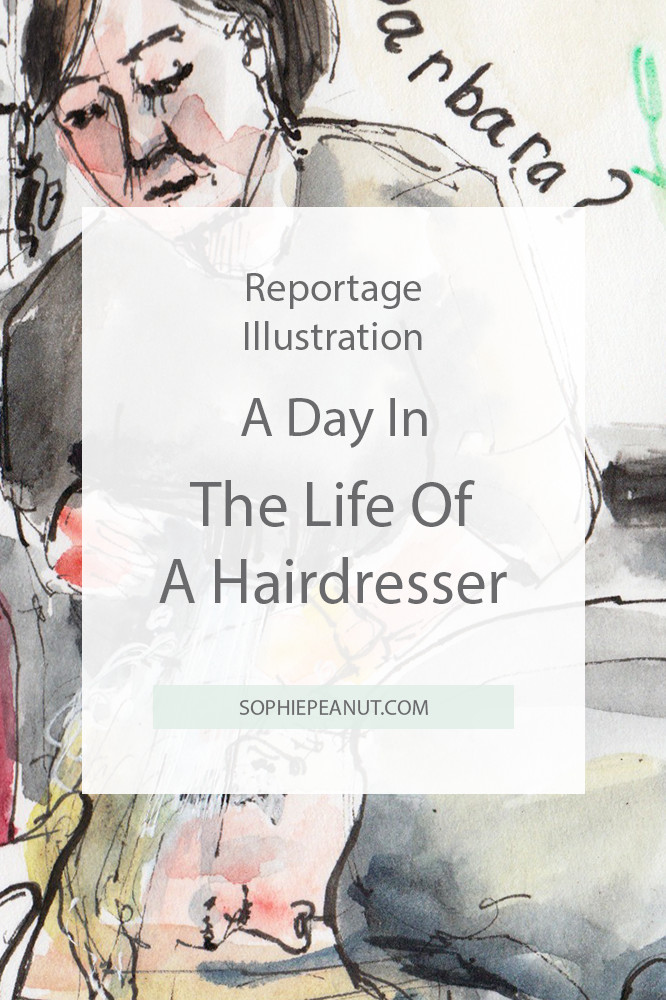 Sophie Peanut is a sketch artist and illustrator based in Halifax UK. She works in pen and watercolour. Sophie loves urban sketching, drawing people and landscapes and likes to illustrate recipes. She also teaches drawing and painting online.

This site uses Akismet to reduce spam. Learn how your comment data is processed.

Previous: State of Calderdale 2018 – Simple Reportage Drawing
Next: A Day At The Garage – Watercolour Pencil Drawings

Hi, I am illustrator based in Halifax (UK). I draw and paint in a variety of media. I like to sketch the world around me and tell stories through pictures.